God’s beautiful caricature it is, it’s beauty and its calmness! No pollution and its neatness. If the sound of traffic and stress and probs you cannot persist, then this is the place you must visit.
At Matheran you will be relax, Rested and Rejuvenating. Really this is the effect of Mathean atmosphere, which you will be experiencing. It is crown placed in sahyadri hill Ranges, at 2400ft above sea level. You will find deep forest and Red mud road at Matheran and for transportation you can walk, can hire horse or rickshaw pullers.
Today in 21st century where car, bike and automobile became your life partner, even after doctors suggestion you can not walk and breathe out of your vehicle. We found that in the whole world, pollution in the city can not be controlled at any level. But the Matheran is calm! Calm!! Calm!!!
Matheran is not just a city which is left behind, but also the dissonance or traffic. 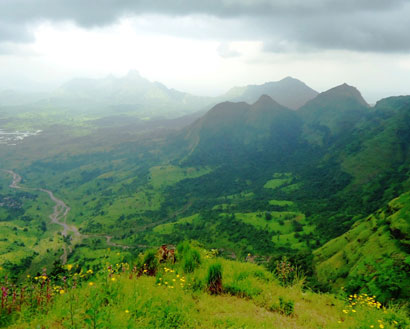 The forest ecosystem at Matheran is unique and remarkable in many respects – its dense and lofty arboreal growth, peculiar blending of evergreen.
Fruits
Matheran’s honey has a reputation of its own. It is found in three or four different varieties. Besides these, Mangoes are also obtainable during the season and also Jack fruits and smaller Black – Berries known as karvand in the vernacular.
Birds
Whenever we visit a point and sit in its thick shade the notes of the cuckoo and the bulbul and various other birds provide heavenly music to our ears.